The wait is over.

The 18-hole Covington Disc Golf Course officially opened Saturday in Devou Park with all the grandeur that one might expect, including commemorative discs, a ceremonial disc throwing, and a public tournament.

City officials expect the course will quickly get a lot of use.

“We’ve got a lot of people who are passionate about this sport who have been anxiously waiting for the course to open,” Covington Parks & Recreation Manager Ben Oldiges said. “We’re thrilled to kick everything off this weekend with a great event and look forward to seeing a robust influx of people coming to Devou Park from now on to play disc golf.”

Following the disc golf tournament, the course officially opened for free use by anybody who wants to use it.

Oldiges said the course will be open dawn to dusk, seven days a week. Registration is not necessary to play.

Hole No. 1 is up the hill from the Stone Shelter at the intersection of Montague Road and Golfview Drive.

Washington was an early supporter of bringing a disc golf course to Covington and connected City officials with Dr. Ryan Freibert, who plays the sport semi-professionally and served as a consultant and planner for Covington for the course’s creation.

At Tuesday’s Board of Commission meeting, he praised Freibert, Parks & Rec staff, and everyone who had a hand in its creation.

“The dedication of these volunteers has been incredible, the amount of hours they’ve put in,” Washington said. “This is a big deal … and is a very, very good thing for our city. I did not realize how popular this sport was until Dr. Freibert educated me.” 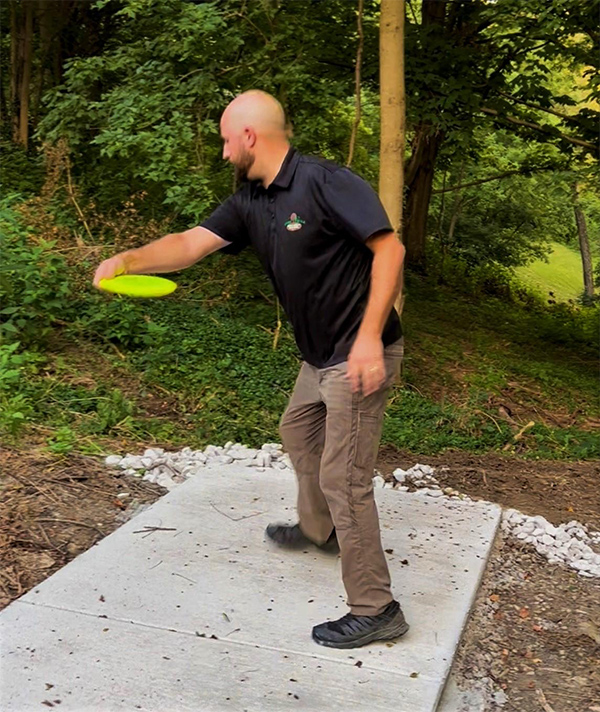 Dr. Ryan Freibert, who plays disc golf semi-professionally and served as a consultant and planner for Covington, tried out a tee on Devou Park’s course during construction. (Photo from City of Covington)

The rules for disc golf are similar to traditional golf by way of scoring and etiquette, but, obviously, the equipment differs. That said, it’s a lot more than just throwing the Frisbee disc we’re all familiar with.

Standing on what is generally a 4-foot by 6-foot concrete tee box, a player aims their disc toward a chain basket that’s placed no less than 100 feet from the tee box.