Putt the Winter Blues Behind You

A Guide to Indoor Putting Leagues

Heading to the course in the winter isn’t for everyone. Cold hands, stiff discs, and a layer of snow that can swallow up drives has many put their plastic away until the Spring. Indoor putting leagues are a fun, snow-free solution to keep disc golfing year-round. Get your friends back together, bring out a few baskets, maybe have a beer or two, and putt the winter blues behind you.

Did you know that some putting leagues average as many as 70-80 players a week? Matt Cheney and Brandon Reed run the largest weekly indoor putting event in the world, the Charlotte Putting League. At their season opener this year, the league pulled in nearly 100 participants. While that is far from the norm, coordinators of indoor leagues can look to the Charlotte Putting League as an inspiration and aspiration. To get to such impressive numbers took time and hard work. The league has been running for 9 years. In that time, they’ve outgrown their venue and moved to new locations three times. As the event grew, they had to try out many different league formats to accommodate such a large crowd.

They landed at Lenny Boy Brewing Co. in Charlotte, North Carolina and settled on a random-draw doubles, cornhole-style format. They use a bracketing system in which teams from a given night play against other teams with a similar record for that night. By the end of the event, the top eight teams have been parsed out and will play each other to determine the winners. This system allows every participant to putt all night, but still keeps things competitive. Matt Cheney says that their format “takes a lot of pressure off of new players and makes the event ultra social. Chances are you meet all sorts of new people, from your partner, to the teams you end up playing against.” 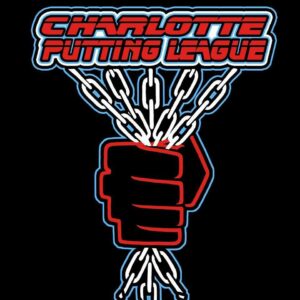 Looking to take down the pros at your local league nights? These tips will help you dominate your indoor putting league this winter and will help you drain them on the course when you get back out in the spring.

Instead of aiming at the basket generally, pick a specific chain link and try your hardest to hit it with the disc. If you miss your link, odds are you will still find enough chains that your putt sticks. For a right handed player, we recommend picking a link above center and just to the right of the pole. That’s the sweet…