The 2022 USDGC and TPWDGC – Tournament Recap

The 2022 United States Disc Golf Championship (USDGC) and Throw Pink Women’s Disc Golf Championship (TPWDGC) returned to Winthrop University last week for two of the most prestigious-to-win competitions of the season. The events saw some of the best played disc golf in Rock Hill history, in front of a bigger and more amped up crowd than ever before.

At the age of 17, Gannon Burr became the youngest player to ever win the title of United States Disc Golf Champion. After tapping in the winning putt, with tears in his eyes, Gannon said that the USDGC was the first tournament he ever watched and was the event that he wanted to win most.


Catrina AIlen won the 2022 Throw Pink Women’s Disc Golf Championship. In her victory speech, the two-time World Champion and seven-time Major winner said that the TPWDGC came with the same nerves as a Major and that the win felt just as important as winning a Major.

The courses at Winthrop are difficult, but fair, with a great variety of shot shapes that test every aspect of a player’s game. Each hole requires smart decision-making and precise execution. With OB, hazard, water, and manditories looming around every corner, if you lose focus for even one hole you can take yourself out of contention for the tournament. Course designers, Harold and Andrew Duvall, have created a track that not only tests shot-making skills, but also mental endurance. Features like the strategically placed long walk up to the often tournament-deciding hole 17 are design elements that make Winthrop such a compelling venue to host a Major.

The tournaments had an expanded Championship Village from year’s past, featuring food trucks, disc vendors, putting games, giveaways, and chances to meet the players. With so much going on in addition to the competition, Championship Week has become the most fun and full spectator experience of any tournament in disc golf. 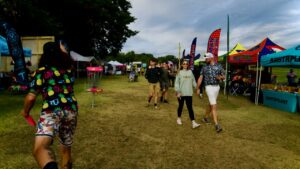 Big Jerm in the Championship Village