The Disc Golf Boom – Let’s Look at the Numbers

Disc Golf is exploding. That much is clear. Your home course suddenly has countless enthusiastic players who just discovered the game in the past couple years. New courses have popped up in seemingly every park around town. Tournaments that used to have one media outlet with a couple cameras following the lead card now have tens of cameras from multiple outlets following the top three or more cards. Nearly every weekend, we’re treated to highly-professional, live coverage of a Disc Golf Pro Tour event or PDGA major. Tournament payouts and player contracts are reaching numbers that seemed impossible just a few short years ago, with multiple players in the sport making seven figures a year. So it is clear that disc golf is exploding – but just how much? Let’s look at the numbers.

In 1976, the Professional Disc Golf Association issued its first PDGA number to “Steady” Ed Headrick, PDGA #001. It took 41 years between that historic day and the issuing of PDGA #100,000 in 2017. Many of the early adopters of the sport could not have imagined that disc golf would ever gain so much interest. But as we now know, in 2017, the biggest phase of growth in disc golf was yet to begin. From that point, it took only four years for the PDGA to hit 200,000 members, an achievement reached on December 24th, 2021. That’s over ten times faster than it took to gain the first 100,000. And the growth has kept accelerating.

The PDGA has active members in over 70 countries, but PDGA members make up just a fraction of the total, active, global disc-golfing population. Estimating conservatively, there are at least 4,000,000 players across the world who play disc golf regularly. And that’s a low-end estimate; the actual number could be much higher! 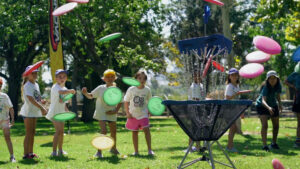 Bored? Here Are 7 Fun Hobbies That Won’t Break the Bank, According to Redditors

15 Free Things to Do in Fort Smith, AR