Luke Roux, a Farmington resident who had been a longtime participant in the West Hartford Youth Hockey program, was honored during the Conard vs. Hall hockey game at Veterans Memorial Rink on Monday.

Eleven days after graduating from Farmington High School in June 2022, Luke Roux was driving home from a baseball game when he tragically lost his life after his car was struck by a drunk driver on Colt Highway.

While he was a Farmington resident, Luke had many ties to West Hartford as well, and at age 5 began playing in the West Hartford Youth Hockey League where his father, Steve Roux, coached for 16 years.

Prior to the start of the Conard vs. Hall boys hockey game on Monday, the first scholarship from the Luke Roux Memorial Fund was awarded to Conard senior hockey player Gavin McGowan.

In addition to awarding the $500 scholarship, the Luke Roux Memorial Fund will support further education and awareness of the dangers of drinking and driving. The Conard and Hall hockey booster clubs each donated to the Memorial Fund. 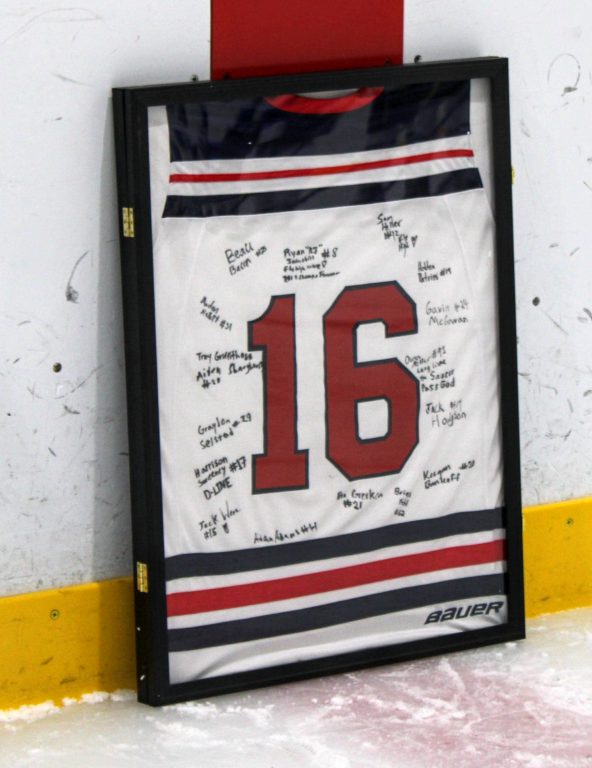 Luke Roux’s youth hockey shirt, signed by members of the Conard and Hall hockey teams, was presented to his parents on Monday. Photo credit: Shane Mallett

Also at the game, Luke’s parents were presented with a No. 16 jersey – their son’s last youth hockey number – signed by many former teammates who now play for Conard or Hall. A plaque with the names of award recipients will hang at Veterans Rink.

An excerpt from the fundraising campaign started in Luke Roux’s honor reads: “Luke was an athlete: ice hockey, baseball, tennis, swimming, and his latest passion disc golf. Luke was a gamer and participated in e-sports events. Luke was a lover of music and a musician: an eclectic taste in music mostly leaning toward progressive rock, an accomplished drummer, violin, keyboards, and guitar. Luke was a scholar: math was by far his biggest strength, and he graduated High School with first honors. UConn recognized his strength and interest in math by awarding him academic scholarship support. Luke was prepared and fully equipped to continue spreading his love and kindness beyond his…