This story has been updated.

“We continue to look for ways to provide DeKalb County residents with new opportunities to engage in outdoor activities,” Chuck Ellis, DeKalb Parks Director, said in a press release. “Over the last several years, disc golf has grown in popularity, and we are happy to provide our community with this amenity at DeKalb Memorial Park.”

Aaron Schwartz tees off during a test play at the new disc golf course being installed at DeKalb Memorial Park on Wilkinson Drive in Southeast Atlanta on Sunday, March 20, 2022. Photo by Dean Hesse.

Ryan Sage, who helped coordinate Intown Atlanta Disc Golf Club’s effort to bring the course at DeKalb Memorial into being, says the club has partnered with pro disc golfer Bryson James from Team Prodigy to hold two free disc golf education clinics at 1 p.m. and 3 p.m. during the event.

“He will cover the basics of disc golf such as putting, throwing, and the basics of the game. We welcome all community members to join us for that Equipment is provided during the sessions,” Sage said.

Disc golf has similar rules to golf, but is played with discs that are similar to frisbees that are smaller and denser. The “holes” are baskets on a stand. The sport is widespread, with local and national organizations to promote it, and there are a few courses around the Atlanta area, including ones at Perkerson Park and Redan.

Sage says that disc golf is a great way to get people outside and use park space that otherwise tends to go under-utilized. He also says that unlike some other sports, the barrier to entry is low.

“I tried to play golf in high school. It’s expensive,” he said, adding that a three disc starter pack costs about $20. 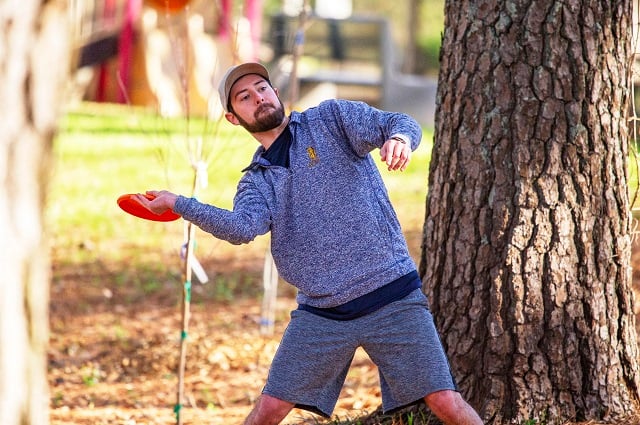 Aaron Schwartz makes a shot during a test play at the new disc golf course being installed at DeKalb Memorial Park on Wilkinson Drive in Southeast Atlanta on Sunday, March 20, 2022. Photo by Dean Hesse.

If you appreciate our work, please become a paying supporter. For as little as $6 a month, you can help us keep you in the loop about your community. To…