The Flight Ratings System was designed to help you know how a disc will fly before you’ve had a chance to throw it. This useful tool will make disc selection based on your desired flight path easier. Before we dive in, note that these are merely guidelines. Each disc will fly a little differently for each thrower based on arm speed and throwing style.


The four number Flight Ratings System was developed by Innova Co-founder, Dave Dunipace, to help explain the flight characteristics of different discs. The numbers explain four traits which vary from disc to disc: Speed, Glide, Turn, and Fade. It is important to note that within the Flight Ratings System, Glide, Turn, and Fade can only be used to help compare discs of the same Speed. For example, the flight numbers cannot be used to help compare the Turn of a Midrange with the Turn of a High Speed Driver. The numbers also can’t be used to compare discs between different companies.  So what exactly do Speed, Glide, Turn, and Fade mean?

Speed is a measure of a disc’s optimum rate to fly through the air. Discs marked with a higher number are more aerodynamic and can therefore maintain a higher speed in flight than discs marked with a lower number. Our scale ranges from 1 to 14, with 1 being slowest and 14 being fastest. Discs marked with a higher number will generally have a wider rim than those with a lower number. Faster discs cut into the wind with less effort and will make good choices when throwing into a headwind. Slower discs are easier to throw more accurately and may actually go farther than a faster disc when thrown with a tailwind. High speed discs are not usually recommended for beginners as they require more power to fly properly. 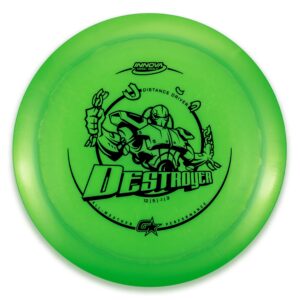 A 12 Speed Distance Driver, the Destroyer is a common choice for throwing into a headwind.

Because they are more aerodynamic and can cut through the wind more easily, faster discs perform better into a headwind than slower discs. So while a newer player should not try to throw a high speed driver when the wind is still, a high speed driver might make a good utility disc for when throwing into a stiff headwind. On the other side of that point, discing down to a slower disc with more glide, when throwing with a…